skip to main | skip to sidebar

I finally hit the velodrome! It's been too long since I last went and man do I miss it. Last weekend I went to the Forest City Velodrome in London, Ontario for a recreation ride. This was both exciting and scary as this would be the first time I would be riding on the track with 10+ other cyclists as they reach speeds of 60km/hr as they ride literally inches above me on the track. Nevertheless, everyone was safe and had an awesome time. I also think we went overboard with taking photos, but I don't mind. Here are some I took using somebody's camera:

*Does anyone know how to avoid having my images clipped like this?*

At 138m and with banks as steep as 51 degrees the Forest City Velodrome is the shortest and steepest permanent track in the world.

Debunking some fallacies about cycling

According to a few (or many?) non-cyclists out there cycling is dangerous, a drain on our economy, and bad for business. Though I can name off all the benefits to cycling I want to look at some of the common “facts” that are hurled at against cycling.

Cyclists should ride on the sidewalk not the road.

Cyclists don’t deserve to be on the road because they don’t pay taxes.

Everyone pays taxes. Income taxes, taxes on goods/services, property taxes, etc. I don’t see how cyclists are able to avoid paying them (do cyclists have a tax exemption card?). Besides, municipal roads are paid for through municipal revenues which come from property taxes. Gas taxes, vehicle registration taxes, and parking tickets do NOT pay for roads. Though 2 cents per litre in Ontario will go to road repair/construction, which can easily be considered revenue neutral (‘ish) to pay for road damages caused by cars. Roads are public, are paid for and used by everyone regardless of what mode of transportation they use.

Cyclists ignore the law, they don’t deserve any rights.

Yes, I will admit that there are cyclists that ignore the rules of the roads to the dismay of drivers and real cyclists alike. However, cyclists are NOT the only one known for ignoring the rules of the road; drivers and pedestrians are just as guilty. Now it’s easy for anyone to claim that one type of road user is worse at it, for example: drivers never check blind spots when they turn, they speed, run red lights, park in bike lanes, etc. Cyclists on the other hand run red lights and stop signs, ride on the sidewalk/street whenever it’s convenient, don’t signal when turning, etc. Though this is what some drivers and some cyclists do this is not true for the rest of them. It is an over-generalization.

Cyclists shouldn’t be on the roads because they are slow and clog up the streets.

Compared to a vehicle a bike is slow, however, if you pit the bike in a downtown city versus a car and have both travel somewhere within 5 miles or less, chances are the bike will win. Bikes have the bonus of being able to bypass idling vehicles at intersections and are sometimes exempt from turning restrictions on roads (or they can walk their bike across the intersection to make a left turn where vehicles normally would not be allowed to).

A bike only occupies a fraction of the space in a lane than a car would and in most cases a car and bike can fit in a lane safely. One bike on the road means one less car. This means that there will be one less car contributing to grid lock, one less car in your way so you can make that yellow light at an intersection, one less car taking up the few parking spots downtown, one less car slowing you down on the road.

Cycling in the winter is crazy and should be banned.

A lot of fears and negative expectations of riding in the winter are quite silly. If anything, I would say most common winter activities are crazy. How is bombing down a hill wearing pieces of wood while carrying pointy sticks with obstacles in your way considered a normal winter activity? How can one justify strapping on metal blades on their feet and go gliding across a rink of ice wielding a stick while bashing others? How is it that operating a human-powered vehicle equipped with brakes, steering mechanism and rubber tyres for traction is crazy? I also have to ask, how many cycling deaths were in some way the result of winter conditions? I think in the past 5 years we've only had 1 and it was out in Quebec.

Cyclists are always at fault when they are involved in a collision.

Cyclists are not as protected from collisions as drivers are; they have no air-bags, seatbelts, or metal cage to protect them so it’s only natural for them to develop an understanding of the risks of careless riding. That being said, a study by the UK government concluded that careless cycling were the result of only 2% of serious injury with another vehicle and there are several other sources from many other countries that back similar findings.

Cycling is not the answer to solving climate change/congestion/whatever other issue.

I can agree with this statement. It is unfeasible to think that the future of transportation lies in cycling; people with mobility issues are at a disadvantage and so those who need to transport very heavy goods across long distances. I do, however, believe that it is part of the solution. Our transportation needs cannot be met by cars alone, nor can it be met by buses, LRT, or subways alone. To use the idiom “Don’t put all your eggs in one basket”, we must realize that we have to diversify our transportation options and integrate them together to reduce congestion and our dependency on cars. So bikes may not be the answer, but they are certainly part of it.

I feel like this post is like preaching to the choir since only cyclists would read cycling blogs and chances are they already know this stuff.

Biking Toronto is finally back up on the interwebs! For those of you who don't know, Biking Toronto is the creation of Toronto cyclist, Joe Travers. Simply put, it's like the cycling version of facebook as there are groups to join, events to be part of and lots of ways to communicate with each other. It's a great way to connect cyclists in Toronto based on ward, discipline or any other way you fancy. I've only been a member for a few hours and already I've found out about some cool events happening around the city that I'll be joining.

If you're a cyclist in Toronto then you definitely should join in, it's free and a great resource.

They also have wicked shirts:

Finally got around to take some photos of my bike:

I swapped out the super heavy crankset (I weighed the drive-side crankset at 1kg!) for an older pair I had lying around and I dropped the derailleur and shifter to go run the bike as a single speed (Now 39x17). I still have some work to do like swap out the brakes and shorten the cables but that can wait. This was also my first ride of the new year. It was hard as hell as the tyres on my folding bike offer little traction in 1" snow, so until the snow melts I'll be using my mountain/polo bike.
Posted by Bikeroo at 5:32 PM No comments:

Cycling in Toronto has changed greatly in the past couple of years; from the creation of the Toronto Cyclists Union to the adoption, stalling of and slow implementation of the city’s Bike Plan. There have been a lot of ups and downs in cycling in Toronto that have really shaped the culture of the bike. We’ve been home to the Toronto Criterium races in the beautiful St. Lawrence Market and hosted the CMWC on the island. We lost cyclist Darcy Allan Sheppard in a controversial altercation and notorious bike thief Igor Kenk lost his bike shop and nearly 3,000 stolen bikes. We got some bike lanes slapped down on our streets but were slapped by the Provincial Government by our lack of cycling infrastructure. Despite a lot of adversary from motorists and some city councillors cycling in Toronto has only gotten better and will continue to do so in the coming years.

Here are a few stats taken from various sources:

Percentage of Torontonians who cycle to work or for play
2009 – 54%
1999 – 48%
Granted the majority of the population who cycle do it for leisure rather than for leisure and utility but at least people are out there being active.

So what's in store for Toronto in the coming years? Well in city is boosting efforts for finish the Bike Plan, increasing the budget by a hefty sum. In 2010 Toronto will be hosting the International Bike!Bike! Conference (http://www.bikebike.org/) and we'll also be hosting the Pan American Games in 2015 which will mean we'll be getting a velodrome in Hamilton (yay!). In addition, the Province is stepping up efforts to deter unsafe driving by doubling or even quadrupling fines for violations such as running a red which will (hopefully) make the streets just a bit safer. Oh and don't forget the cell-phone ban will be coming into full effect too meaning less careless drivers on our streets.

Happy new year and safe riding!
Posted by Bikeroo at 11:11 AM No comments:

Fines for dangerous driving in Ontario are set to increase in 2010 with some fines doubling or even quadrupling. Though this won't deter all drivers one can hope that the increased fines will definitely send out a message to motorists that running a red light is just not worth it. Hopefully this will, in combination with the hand-held device ban, result in a decrease in dangerous behavior on the road making cycling conditions safer in Ontario.

Posted by Bikeroo at 9:12 AM No comments:

Toronto is one of the 5 North American cities with the highest levels of ridership at 1.7%. Sure we pale in comparison to places like Vancouver or Portland but we're working our way up. 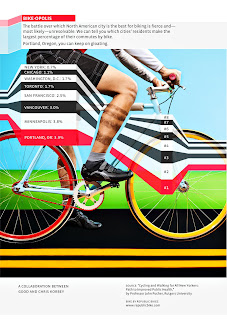 I don't know what bugs me more about the photo the fact that it's a Republic Bike or that the saddle is so damn low.
Posted by Bikeroo at 2:53 PM No comments:

Bikeroo
Bikeroo is an Urban and Regional Planning student and a full time cyclist; from utilitarian, to road, to track, to polo.

This is a Flickr badge showing items in a set called Bicycling in Toronto. Make your own badge here.